All Collections
7. Methods, Research & Curriculum
The Benefits of a Music Education

The Benefits of a Music Education

Research, links and information about the benefits of giving kids and adults a music education

Written by Prodigies Team
Updated over a week ago 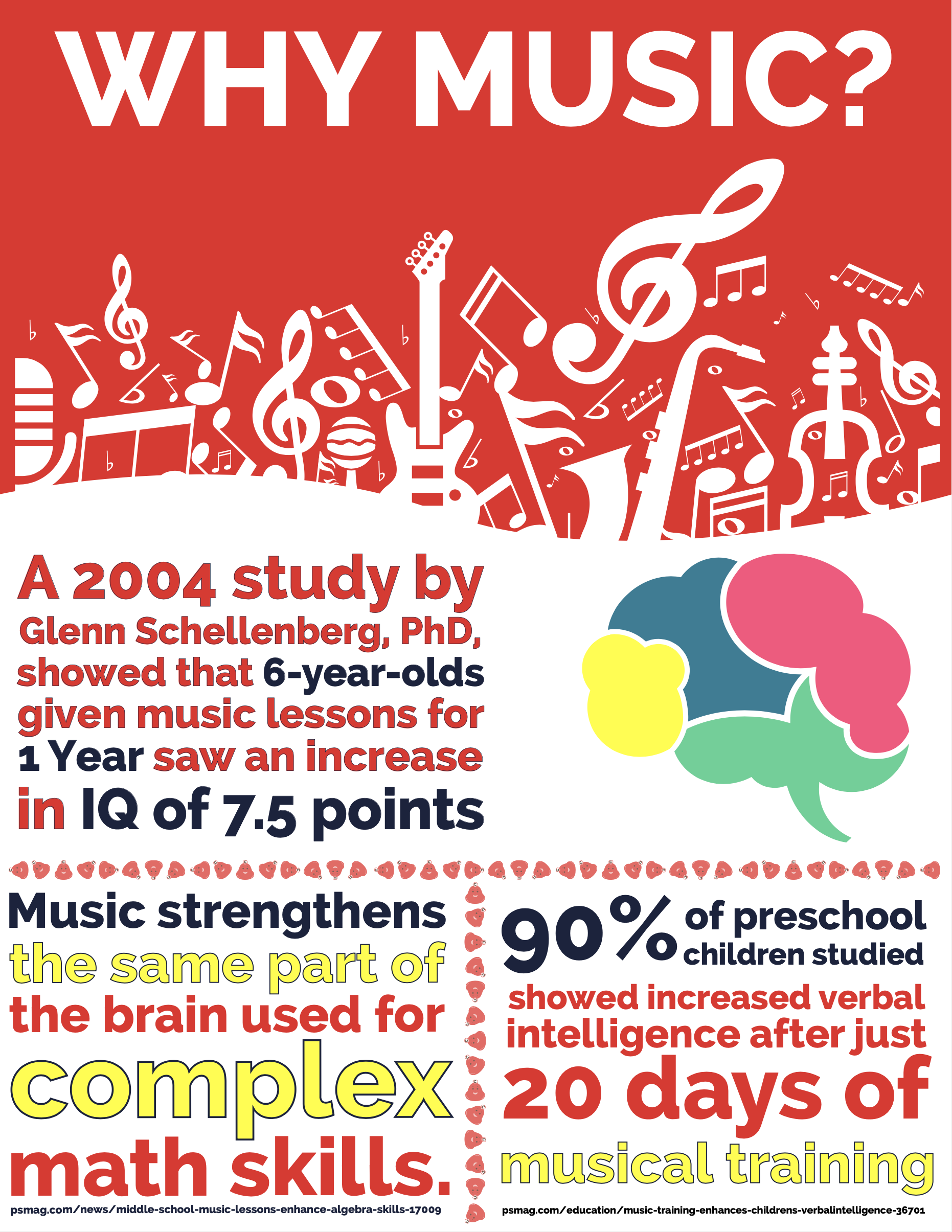 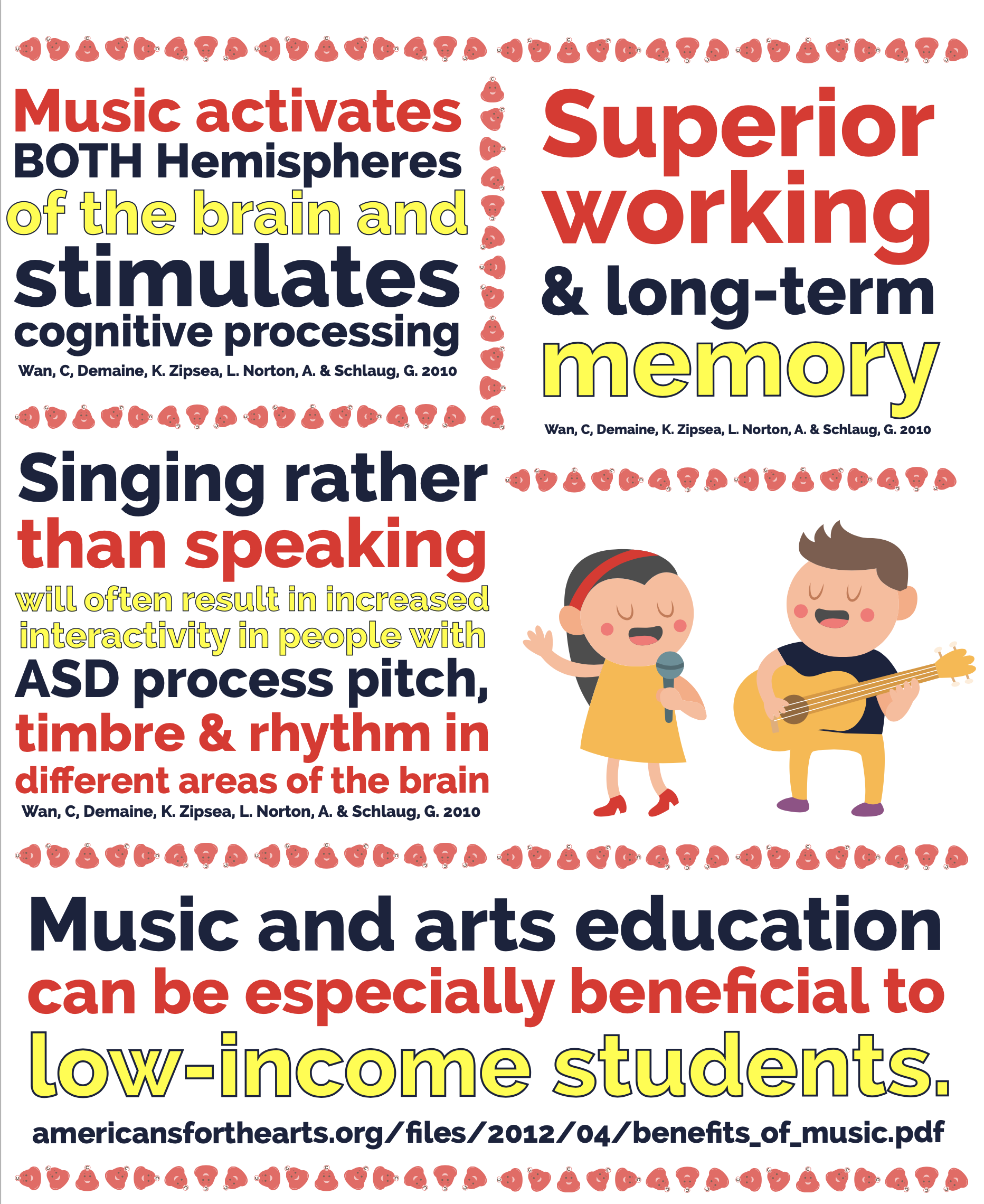 There are many cognitive, social and emotional benefits of a music education.

On one hand, music is language. It has its own vocabulary, sounds, syntax and colloquialisms that are spoken across borders and oceans. It's call and response, give and take, listen and reply.

On the other hand, music is math. It's patterns and sequences, fractions & ratios, divisions and subdivisions, and it follows almost universal patterns that border on sublime and divine.

And on the other hand, music is fun. You can crank it your car, sing it in the shower, pump up your next party or compose your next masterpiece. You can play it with your friends, with your family, or it can be a solo endeavor to escape a busy day.

So whether you you want better test scores, a higher IQ or a just the joys of a rewarding skill set that will enrichen everyday of your life, learning the language of music is a must. You don't need to become the next Beethoven, but going from a music lover to an ever beginner/intermediate musician will have a massively positive impact on your life.

Learn more about the research, with some of our favorite passages and links below.

“Research indicates the brain of a musician, even a young one, works differently than that of a nonmusician. “There’s some good neuroscience research that children involved in music have larger growth of neural activity than people not in music training. When you’re a musician and you’re playing an instrument, you have to be using more of your brain,” says Dr. Eric Rasmussen, chair of the Early Childhood Music Department at the Peabody Preparatory of The Johns Hopkins University, where he teaches a specialized music curriculum for children aged two months to nine years.”

“Music makes your kid interesting and happy, and smart will come later. It enriches his or her appetite for things that bring you pleasure and for the friends you meet.” While parents may hope that enrolling their child in a music program will make her a better student, the primary reasons to provide your child with a musical education should be to help them become more musical, to appreciate all aspects of music, and to respect the process of learning an instrument or learning to sing, which is valuable on its own merit.”

-PBS: The Importance of a Music Education

“With music lessons, because there are so many different facets involved–such as memorizing, expressing emotion, learning about musical interval and chords–the multidimensional nature of the experience may be motivating the [IQ] effect,” said study author E. Glenn Schellenberg E. Glenn Schellenberg , of the University of Toronto at Mississauga.”

“I really think you’ll find the strongest effects for young children,” Rauscher said. “That’s not to say that you won’t find anything in adults, but I think it would be a lot harder and would really take a lot longer.”

“…it is very interesting that the children taking music lessons improved more over the year on general memory skills that are correlated with non-musical abilities such as literacy, verbal memory, visiospatial processing, mathematics and IQ than did the children not taking lessons. The finding of very rapid maturation of the N250m component to violin sounds in children taking music lessons fits with their large improvement on the memory test. It suggests that musical training is having an effect on how the brain gets wired for general cognitive functioning related to memory and attention.”

“Our work explores how musical training affects the way in which the brain develops. It is clear that music is good for children’s cognitive development and that music should be part of the pre-school and primary school curriculum.”

“Musicians are often reported to have enhanced neurophysiological functions, especially in the auditory system. Musical training is thought to improve nervous system function by focusing attention on meaningful acoustic cues, and these improvements in auditory processing cascade to language and cognitive skills.”

“Children who completed 2 years of music training had a stronger neurophysiological distinction of stop consonants, a neural mechanism linked to reading and language skills. One year of training was insufficient to elicit changes in nervous system function; beyond 1 year, however, greater amounts of instrumental music training were associated with larger gains in neural processing.”

A sensitive period for musical training has also been proposed based on evidence that early-trained musicians demonstrate advantages over late-trained musicians for musical tasks such as rhythm synchronization and pitch identification, as well as differences in brain structure, particularly in motor regions (Takeuchi and Hulse, 1993; Schlaug et al., 1995; Amunts et al., 1997; Steele et al., 2013). Recent studies from our laboratory have shown that musicians who begin training before age seven perform better on auditory and visual Rhythm Synchronization Tasks (RSTs) even when groups are matched for years of experience, formal training and hours of current practice (Watanabe et al., 2007; Bailey and Penhune, 2010, 2012). More recently, we have also shown that early trained musicians have greater gray matter in the pre-motor cortex and greater white matter integrity in the corpus callosum (Bailey et al., 2013; Steele et al., 2013).

-The Relationship Between the Age of Onset of Musical Training and Rhythm Synchronization Performance: Validation of the Sensitive Period Effects

“Recent reviews (Costa-Giomi, 2012; Schellenberg and Weiss, 2012) confirm that in addition to being good listeners, musically trained individuals exhibit enhanced performance on tests of verbal abilities, including vocabulary, phonological awareness, reading, and spelling. Music training is also associated positively with performance on tests of spatial abilities and non-verbal reasoning. Because these associations extend across different cognitive domains, they implicate domain-general processes. Indeed, even after accounting for demographic variables, music training is associated positively with performance on tests of auditory and visual memory (Jakobson et al., 2008; Degé et al., 2011b), and with IQ (Schellenberg, 2006, 2011a,b; Schellenberg and Mankarious, 2012).”

“The idea that a potentially enjoyable activity such as learning to sing or to play a musical instrument could have beneficial side-effects on cognitive functioning is obviously appealing.”

“From an early age, musicians learn complex motor and auditory skills (e.g., the translation of visually perceived musical symbols into motor commands with simultaneous auditory monitoring of output), which they practice extensively from childhood throughout their entire careers. Using a voxel-by-voxel morphometric technique, we found gray matter volume differences in motor, auditory, and visual-spatial brain regions when comparing professional musicians (keyboard players) with a matched group of amateur musicians and non-musicians.”

“Learning to play an instrument is a highly complex task that involves the interaction of several modalities and higher-order cognitive functions and that results in behavioral, structural, and functional changes on time scales ranging from days to years.”

-Musical Training as a Framework for Brain Plasticity: Behavior, Function, and Structure

“Here we report the effects of two interactive computerized training programs developed for preschool children: one for music and one for visual art. After only 20 days of training, only children in the music group exhibited enhanced performance on a measure of verbal intelligence, with 90% of the sample showing this improvement. These improvements in verbal intelligence were positively correlated with changes in functional brain plasticity during an executive-function task. Our findings demonstrate that transfer of a high-level cognitive skill is possible in early childhood.”

Did this answer your question?